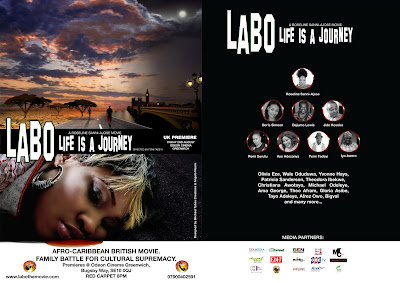 An Afro-Caribbean/British film emphasizes on family issues, relationship and marriage between two foreigners and young offenders living abroad. The film portrays the life of a mixed diaspora family resident in London for a very long time.

The husband who fed up with life in the UK, decided to move back to his home country, convinced his adult children and wife, another foreigner from a different country will relocate back with him . They heeded his call but would things work as he anticipated ?

The film tries to warn migrants never to forget their roots as they get absorbed by foreign culture and other influences. Even if you don't like conditions in your homeland, don't condemn it, because there is no place like home .

The film centers on clash of cultures between two Diasporas and that of UK; as it affects their marriage and world views. The step mum of the main actress in the movie is a Jamaican and her father, a Nigeria, tend to blame her for every wrong in the family especially on raising their children as she is too soft with children. But then for any marriage to work it's never about culture or creed, it's about showing understanding and love among people.

LABO also looks into young Afro-Caribbean descents that get into trouble and sentenced to jail in a place like UK, and how their lives can be messed up and ruined due to societal stigma and other nuances.


The film was produced by Roseline Sanni-Ajose while Femi Fadeyi is the writer of the movie. It parades seasoned actors and actresses like Jide Kosoko, Dejumo Lewis, Wale Ododuwa Iya Mero among others.
Posted by Unknown at 16:46