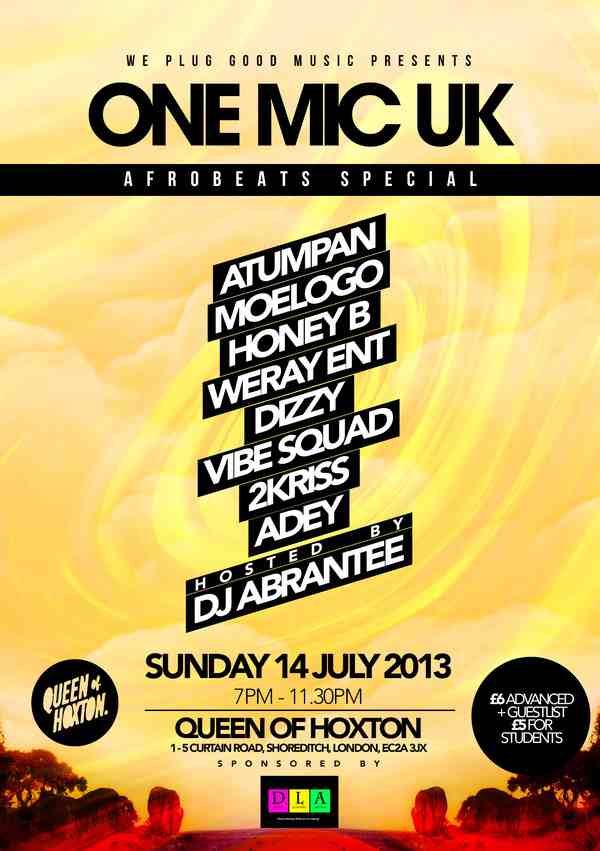 We Plug GOOD Music presents ONE MIC UK... Afrobeats Special 2013! Featuring some of the finest and most sought after artists setting the trail for the UK's burgeoning Afrobeats genre and scene! ATUMPAN, MOELOGO, HONEY B, WERAY ENT, DIZZY, VIBE SQUAD and ADEY will all be performing LIVE at renowned Shoreditch live music venue Queen of Hoxton on Sunday, July 14 for our first ever Afrobeats Special which will be hosted by award-winning DJ ABRANTEE (Choice FM) plus our very own resident DJ, DJ IISYSS bringing the vibes on the decks!

With Afrobeats music taking over the charts in recent weeks courtesy of Fuse ODG and his hit single "Antenna" which debuted at #7 on the UK singles chart, everyone that is anyone is beginning to sit up and pay close attention to the burgeoning UK Afrobeats scene and with the likes of Mista Silva, Atumpan and Moelogo all being play-listed across BBC 1Xtra and Choice FM, the massive appeal of UK Afrobeats continues to grow with major label interest even reaching fever pitch. It is now time to introduce you to some of the finest new artists that are set to take the genre by storm in the coming months and carry UK Afrobeats to its next level...

Introducing MOELOGO, whose latest single "Mary J" has recently been added to Choice FM's hugely coveted A-list playlist. The music video for his previous single "Pangolo" has successfully amassed over 120,000 views on YouTube in just over three months and was supported by both Choice FM and BBC 1Xtra. Also introducing ATUMPAN, who is signed to Ministry of Sound and is the artist behind cross-over hit single "The Thing", the music video of which has been viewed over 1.5 million times on YouTube.

Joining them on the bill for this one-off Special event are three of the biggest UK Afrobeats groups of 2013 - WERAY ENT with their two massive singles "Masquerade" and "Ching Chang Wallah", VIBE SQUAD, who have been featured in The Guardianand The Evening Standard and are currently on a School tour with CitySafe and sibling artist/production duo 2KRISS, who produced Amplify Dot's massive single "King Kong" and have previously collaborated with some of the biggest Afrobeats exports likeWizkid and Ice Prince.

As the only female on this line-up of rising UK Afrobeats stars, HONEY B has Afrobeats music flowing through her veins as her father is none other than legendary award-winning Fuji musician King Wasiu Ayinde Marshal (KWAM 1) and her two singles to date, "Sempe" and "Up Down" have quickly propelled her to the forefront of UK Afrobeats. Rounding up this very eclectic mix of new school leaders of UK Afrobeats areASquared/Warner Music signed recording artist DIZZY aka 'Vocal Chameleon' and Nottingham based artist/producer ADEY, whose debut single "Beremole" featuring Tiwa Savage was one of the best Afrobeat records of 2012.

ONE MIC UK... Afrobeats Special takes place on Sunday, July 14 at Queen of Hoxton and will be hosted by award-winning DJ and Presenter, DJ ABRANTEE - BE THERE!

**ONE MIC simply boasts the premier avenue for new and upcoming performers to take a stage and do what they love in front of a wide range of audiences that may OR may NOT have heard their material BUT will definitely appreciate the ART**
One Mic UK... Afrobeats Special is Managed by Vir2uous Limited