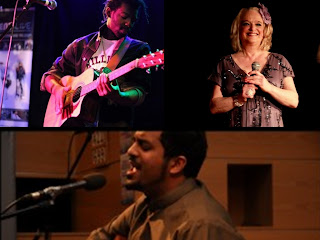 
Event is suitable for all ages

At the time of rising religious tensions in the UK, world jamboree is a welcome reminder of the possibility of inter faith co-operation. Last year we called it an inspiring evening of music, art and fun. This year, the world music, food and art inter-faith charity fund -raiser for Health Poverty Action is set to return to the Jewish Museum for a second successful year.
Last year's evening was a sellout affair  and this year's event looks set to continue this trend with new artists being introduced to the line up including, acclaimed vocalist and kirtan leader Nikki Slade  along with Welsh dance and film duo, Alys Hughes and Elly Strigner,Jewish reggae singer David Sudwarts will also be appearing for the first time, sufi stars Silk Road will be returning, along with jazz vocalist Toni Green, accompanied by world jazz pianist Yosi Marshall, Italian singer/songwriter Lyra Veroli, Sebastian Blake -the critics Buddhist Prince will be returning with his  band after a recent appearance at Tate Modern's prestigous Hyperlink series this spring, folk singer Julie Helene Kvaerndrup is making her World Jamboree premier along with the welcome return of the charming Baha'i quartet. With the lineup, there is so much more to see.Jewish world jamboree is being held in support of Health Poverty Action's women's clinics in Myanmar formerly known as Burma and Sierra Leone.Whole Foods will again be contributing food for the event, along with Polish deli Belvedere Traditional, as well as chefs from around the world. They will prepare dishes from Italy, France, India, Japan, America and Angola.The event will be introduced by several faith leaders, including Buddhist youth division leader Kiyoshi Inoue, Rabbi Natan Levy,and Iman Muhammad Al-Hussaini - close friends who often give talks about the importance of inter-faith dailogue. There will also be leaders of other faiths.